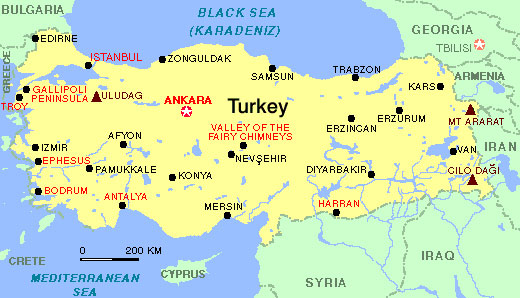 A pleasant little town, Bodrum has acquired something of a Bohemian reputation from the time when dissident artists and writers were exiled there in the early twentieth century. In a lovely setting, it has become a popular tourists resort over the past few years. The imposing crusader castle in the bay, built by the Knights of St. John, is home to the best underwater archaeological museum in the Mediterranean, and is well worth a visit. Among the artifacts on display are finds from what is thought to be the earliest known shipwreck dating from the Bronze Age. Oraklar Island is a rocky little island with some pleasant, sheltered coves for swimming and water sports.

Cokertme is an attractive setting with impressive mountains rising behind. One or two little restaurants offering good, simple local dishes. Carpets are made in the village and it is interesting to watch the process.

In a beautiful, remote bay with a glorious green backdrop of pine covered hills there is an excellent restaurant for dining ashore.

Another lovely little bay in an idyllic setting. Visit ancient Kedrai on nearby Castle Island. Part of the Rhodian Confederacy in Hellenistic times, it was later occupied by the Romans. A small beach on the west side of the island is known as Cleopatra's Beach (the island is also known as Cleopatra's Island). The story goes that Cleopatra lived here for a short time and, extravagantly, had galley loads of North African sand shipped from Egypt to create a beach for her lover Anthony to sunbathe on! Whatever the truth of that may be, scientists report that the sand on the island is not typical of the region but is, indeed, typical of, African sand. In Sogut, there is a fresh water spring with water so pure that the bay is locally known as "honey water bay." A lovely setting among thick pine woods and a couple of nice restaurants for dining ashore.

A large bay with many creeks and anchorages, the place gets its name from the time when English torpedo boats used it as a base during the Second World War. The slopes on the eastern side of the bay are densely covered by magnificent pine forests, while the head of the bay is graced by lovely deciduous trees including the fragrant amber which grows in only a few places in the Eastern Mediterranean. The fields and woods make for attractive strolls ashore.

This chain of small islands close to the coast offers good sport for underwater fishermen.

After breakfast, leave your yacht in Bodrum with wishes to meet again.