The islands of Dodecanese are located on the south eastern side of Greece, between Cyclades and the coasts of Turkey. Less popular than Cyclades and with a different style, these islands distinguish for their Medieval architecture and the peaceful beaches. The most popular islands of Dodecanese islands are Rhodes and Kos, while Karpathos is also getting famous over the last years. Kalymnos is developing as a rock climbing destination, Leros is a diving destination, while Patmos is famous for its spiritual character as this is the place where Saint John wrote the Apocalypse. The rest islands of Dodecanese Greece, smaller in size, are considered more alternative destinations. 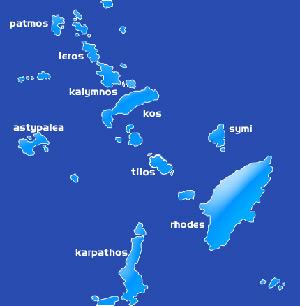 A small mountainous island renowned for its sponge divers and also for its shipbuilders was reputed to be the birthplace of the Three Graces. While its interior is punctuated with small valleys, its coastline alternates between being steep and rocky or sandy and indented with little coves. In antiquity it bore the names "Aigli" and "Metapontis" It took its present name from the nymph "Syme" who was Poseidon's wife. After its conquest by the Knights of St. John in 1373, commerce and shipping flourished until steam replaced sail. The stately mansions in the main town date from this period, which reached its peak in the 19th century.

The volcano, dormant since 1888. The white crater with the streams of evading sulphur, the spas, colours ranging from yellow and mauve to dark red and black, olive trees, almond trees, vineyards and oaks. Elements, which will help you, feel rather. .. helpless under nature's evident superiority. The inhabitants though seem to have got used to the idea: they are famous throughout the area for their lively feasts, which in most cases last for a few days! After a dive in the water - watch out for the strong currents - nibble on the local moussaka.

At the top of the "triangle" formed by the islands of Samos, Ikaria and Patmos, these tiny islands - with merely total 1.400 inhabitants most of whom preoccupy themselves with fishing - are the next stop of our cruise. Everything is within walking proximity: the secluded beaches, the new as well as the restored houses all with plenty of flowers, the two windmills on top of the hills, the spacious square under the shadow of plane trees...

Once in the picturesque, well-sheltered harbour of Kos, the charms of the island become immediately evident. Palm-lined streets lead to many Classical and Hellenistic sites (early Christian Churches with their noteworthy frescoes), graceful minarets mingle with roman remains, and the great medieval castle, which was defended by the Knights of St. John flanks the harbour. Hippocrates, the father of ancient medicine, by tradition taught under a colossal plane tree nearby. About 4 km out of town is the great Doric Temple of Asklepios and the Asklepeion (Medicine School) 400 BC, a major center of healing in ancient times. The busy waterfront is lined with cafes and taverns, many hotel are on further beaches. Not surprisingly, thousands visit Kos, every season.

Closely related to sponge fishermen, legend, harsh mountainous regions, austere rock formations, caves. Traces of her history are visible on each and every step: castles, monasteries, remains or sanctuaries, caves with prehistoric findings, geological changes. The town with impressive monuments and buildings e.g. the Municipality and the Library, seems like a painting, which ever changing colours and scenery clinging on the surrounding hard slopes. Coves and bays are available for exploration, by the most adventurous. The local shops offer a wide variety of excellent quality sponges while the stuffed lamb - a local delicacy - awaits the most daring.

Platanos, Agia Marina and Pandeli are the names of the three separate areas, which uniformly compose the main town of the island that has nothing to envy from all previous ports of call in terms of history, natural surroundings, overwhelming views, evergreen slopes and contrasts. Fragments of the Roman Castle - "Braze" - will welcome you in port on arrival. The town itself with large winding streets, alleys with eucalyptus trees on their sides, the parks, the mansions, as well as the Castle overlooking the town, are only examples of what will surprise you, the first time visitor. Fish marinated in rosemary, roast octopus, and "gavathes" - tropical fruit available only in Leros - are more examples of what will astound you!

Gentle, low hills covered wholly covered with bushes, slopes ending in lace like beaches, small valleys with olive groves, fields and vineyards which form sandy or pebbled beaches are all "trademarks" of the island. She seems to have been designed by nature in order to provide tranquillity and holiday relaxation amidst kind and openhearted inhabitants who keep tradition alive. Small distances, ideal for walks through nature, paths and shortcuts all lead to the nearby castle, the chapels, the ever-clean beaches.

Rising sharply from the sea, Patmos is composed of three masses of volcanic rock connected by narrow strips of land. The approach to the harbour and village of Skala is up a long, narrow inlet watched over by the great medieval monastery of St. John the Divine, visible from all points at sea, and which draws thousands to Patmos every year. The monastery houses the body and shrine of the founder, the XI Century Saint Christodoulos and a magnificent library of ancient manuscripts. Below, on the hillside, and marking the site where by tradition St. John received the word of God, is the Church of the Apocalypse (Revelation). From the monastery roof, dramatic views range far into the Aegean and over Asia Minor. Patmos is one of the most remarkable medieval sites in all Greece and not to be missed by the traveller in the Dodecanese.

The easternmost island of the Aegean is within swimming distance of Asia Minor. Images of the island are framed by bunches of Samian grapes, vine leaves and vineyards. The capital, Samos, is built like an amphitheater at the end of a deep bay, next to the harbour of Vathi. Plane trees, springs, and neoclassical buildings coexist harmoniously with modern elements at Karlovassi. Gorgeous beaches at Kokari, pebbled ones at Potami, busy ones at Tsamadou and the best one on the island at Chrissi. There are many monasteries on the Samos, such as Megali Panagia, Agia Zoni, Vronta, Panagia Spiliani, Zoodohos Pigi. Finally, to the south is the Pithagorio or Tigani with the ruins of the ancient acropolis and Evpalineio aqueduct, and further south still is the Heraio, dedicated to the worship of Hera.