The Sporades islands are geographically located between the Greek mainland and the islands of North Eastern Aegean, almost in the center of the Aegean Sea. These four small islands have a special character each and amazing nature. The most popular island of Sporades Greece and much frequented by the youth is Skiathos, while Skopelos and Alonissos have more family atmosphere but still gorgeous beaches. The least known but equally beautiful island of Sporades is Skyros, with a picturesque capital town, secluded beaches and interesting sightseeing. 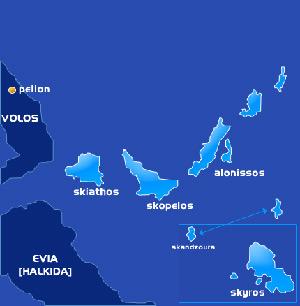 is a verdant idyllic paradise with more than 70 bays and coves and three harbours. Nine small islands orbit Skiathos as if mesmerized by the island's beauty. The principal town, also called Skiathos, was built in 1830 on two low hills. History has left impressive landmarks on the island, be it the Castle remains, on the top of the modern town, Monasteries dating back to the 17th century, local museums with post Byzantine Icons, guns, precious glass and porcelain objects. The island is richly endowed by nature with numerous, seemingly endless sand beaches and conifers reaching the fringe of the sea. The nights in Skiathos are especially lively.

is the island lying roughly parallel to and just to the east of Alonissos whereas further north is the island of Pelagos with the bay of KYRA PANAGIA. All these spots offer unrivalled beauty with crystal clear water.

is long and thin and surrounded by scattered islets. These islets and the area around them are the Marine Park which is the last refuge of the Mediterranean seal "Monachus-Monachus". The ruins of an ancient city can be found on Psathoura and a cave decorated with multi-hued stalactites and stalagmites is the famous cave of Cyclops. Rich vegetation covers the island, and in some cases, the pines actually touch the deserted beaches while fresh lobster, and local cheese pies are there for you to taste.

is low hills, good underwater fishing and diving, crystal clear water, sandy beaches, little seaside taverns, sea caves, and the unique Skyrian ponies. From the castle above the Hora, which combines Byzantine and Venetian ruins with older fortifications, the town spreads out below you in a cubists dream. Each of the houses has an interior that reminds one of a folk art museum, and much of the handmade folk art is sold in little shops.

is exceptionally beautiful with scenic coves, bright white churches and monasteries among picturesque farm-house glimpsed through the gold-green of the olive groves on even slopes, under the brilliant light of the sun. Moreover, the Venetian Castle and the 123 chapels - most of which act as bulwarks for Orthodoxy - present throughout the island are sure to produce a profound effect on the beholder. In the few scattered villages and the picturesque sites we are sure that you will re-discover peace and tranquillity.