The most famous island group in the Aegean Sea comprises some of the most beautiful islands in the world!

Gorgeous sandy beaches, architecture in white and blue, traditional lifestyle, folk music, warm, hospitable people and barren landscapes with isolated chapels turn a trip to the Cyclades into a lifetime experience. Millions of Greek and foreign visitors come to the Cyclades every year to enjoy the dazzling light and the crystal blue waters, in the quest of the paradise on earth.

Our trip takes place in the crystal waters of Aegean sea and the Cyclades Islands, giving an opportunity to enjoy the unique beauty of Greek Islands and gain valuable experience in traditions and history 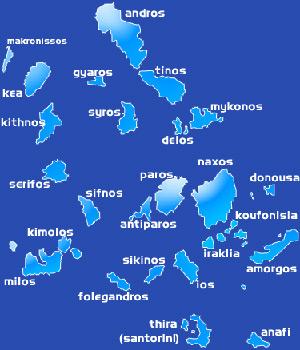 This exceptionally picturesque island is very close to Athens and offers relaxing vacations and pristine beaches at Pisses, Korissia, Koundouros, Otzia bay and Poles bay. Ioulis, the town, is built on the remains of the ancient town. The picture of the island that remains is of little valleys with vineyards and orchards between mountainous masses, leading to idyllic coves. One and two storey houses with tiled roofs, stone-paved alleyways, chapels, windmills, and monasteries, the most important of which is the Kastriani Monastery.

World famous, is the cosmopolitan centre of the Cyclades with over 700 churches according to the claims of the inhabitants. Low rocky hills slope down to enchanting golden beaches. Windmills overlook majestically the port at the town. A side of the town known as ‘Small Venice’ with numerous houses built on the fringe of the sea is one of the meeting points at night. White-washed cube-shaped houses are scattered about. In the narrow streets of the town chapels and picturesque taverns hide among folk art shops and stores selling jewellery and furs. Trends that will sweep the international scene are born in the intense nightlife of this modern resort.

The sacred island of Delos was, in the myths, the birthplace of Apollo and Artemis. Today the island is uninhabited; it is a vast archaeological site whose superb monuments, remains of ancient temples, sanctuaries, the Market Place, the Theatre, the houses, the mosaics draw thousands of visitors in pilgrimage to what was, for a thousand years or so after the 9th century BC, the political and religious centre of the Aegean.

(or NIOS as the locals call it) is decorated with small scenic bays, countless chapels, vineyards, and olive trees, all set under the clear bright Cycladic sky. The sites of Ios include a Hellenistic tower of Plakotos and the remains of an ancient aqueduct at Agia Theodoti, traces of an ancient temple at Psathi and ruinous Venetian castle at the spot known as Paleokastro. Lovers of the sea will be enraptured by the superb beaches of Ios such as Milopotas, Agia Theodoti, Psathi, Kalamas, Plakes and Manganari.

One of the best known of the Cyclades differs from the other islands in the group thanks to its geological morphology, the result of action by a volcano now dormant. Bright white domed houses clinging to the cliff sides of the caldera formed by the volcano's explosion in 1500 B.C. have an incredible view of Kamenes (burnt ones) the coal coloured islets in the middle. From the landing place, Skala, we can climb up to Fira, the capital, on foot or on donkey back. There is a funicular railway for those who whish to avoid the hundreds of steps. Some of the most spectacular beaches (Monolithos, Kokkini Paralia, Perissa) can be found on Santorini: some with dark pebbles and others with black sand. A whole civilization is coming to light at the archaeological sites at Akrotiri, the prehistoric city and Messa Vouno, where the ruins of Ancient Thira lie. The missing piece of Santorini once perfect circle is Thirassia, the wounded islet that closes the caldera, which is Thira in miniature.

Grey trails line the rocks of Sifnos and white chapels lie between them. Here green alternates with dazzling white. Rare beauty, spellbinding views. Yards, alleyways, workshops - where the famous Sifnian pottery is made - 365 churches, chapels and important monasteries. The island was famous in ancient times for the wealth, which came from its gold and silver mines. The old capital of Kastro remains an example of medieval town planning. Vivid nightlife and numerous taverns serving local delicacies, among which "revithada: - roast chick peas - is the most characteristic, guarantee the best of memories.

It was on the small island of Kithnos, famous in antiquity for the excellence of its administration (according to Aristotle in his "Constitution of Kithnos") that recent archaeological finds have provided evidence of the earliest presence of man in the Cyclades. The shores are heavily indented and the island has radioactive thermal springs (Loutra) with great curative powers. The churches are beautiful and are graced with fine woodcarvings and with icons painted by the Cycladian painter (1700) Skordilis. The port of the island, Merihas, is on the western side of the island. Hora or Messaria, the island's capital is 8 km from Merihas and stands on a hillside plateau. A little way to the south is the island's former capital, which retains its ancient name of Driopida - a picturesque village, very typical of the islands. Some of the good beaches of the island for swimming can be found at Merihas, Episcope, Flambouria and Agios Stefanos.